A company founded in 1988, Dutchmen has provided a wide array of entry-level recreational products. Dealing exclusively with travel trailers at the beginning, Dutchmen promptly added fifth wheel models. In 1993, truck campers and motorhomes were added to the Dutchmen brand. Dutchmen would stop making truck campers after the 2001 model year and would re-establish itself as an exclusive builder of recreational trailers after the 2010 model year. Since 1991, Dutchmen have operated as a division of Thor Industries. 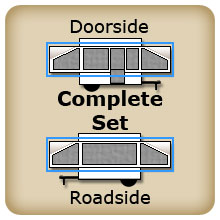 Complete Dutchman Canvas Replacement (1997 and prior)